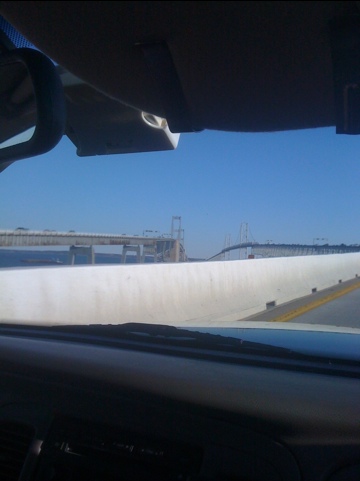 Today I drove to BWI airport to pick up some friends returning from vacation. To get to the airport from where I live requires a trip across the Chesapeake Bay Bridge. It is a four and a half mile bridge high over the bay. It starts with a long climb to the top before a downward right hand turn back to land. Most days crossing the bridge does not bother me but due to weather I have had some terrifying crossings which force me to pull over to the side of the road once off of the bridge to listen to my heart pound and to put my stomach and heart back where they belong. Thankfully today was not one of those days. It was cloudy but one could see clear to Baltimore and then down the bay to view the ships anchored waiting for the harbor pilots to take them into port. Traveling across the westbound span affords one a fairly clear view of the bay as the bridge has four steel bars that run the length of the bridge that separate you from the bay. The eastbound span is made up of jersey barriers except where the suspension span is. Anyhow today I was hanging back a little bit from traffic when a flock of birds flying in a V formation caught my eye. At first I thought they were pelicans. I became a bit mesmerized by the birds and only half heartedly paid attention to the road. I paid attention enough to know that the birds were altering the flight path to avoid the traffic ahead of me and the tractor trailers. I thought they were going under the bridge. To my horror I realized that we were going to hit the same area of the bridge at the same time. There were fifty birds that I now realized were cormorants. Not as large as pelicans but not too small either. I looked behind me and found I could slow down and possibly avoid the birds without causing an accident as traffic was three quarters of a mile behind me and traffic ahead of me was about half a mile ahead. Just as I decided a collision was unavoidable the leading birds took matters into their wings. All the sudden one went up and they parted like red sea and went over me. It was an amazing experience and I know they were doing it for survival but I felt blessed. I had in one thought been praying they would go over me and not be killed and at the same time was prepared for the horrible impact of hitting one or more but knowing I could not swerve being one hundred and eighty six feet above water. I am always grateful for nature and it’s wisdom and divine intervention. So often I have found if I just step back and allow life to happen and experience as it happens rather than always trying to change it I am much more relaxed and happier and can handle whatever comes my way much better be it good or bad. Lately I have found myself starting to get caught up in trying to anticipate outcomes rather than let them happen. The cormorants today reminded me I am not in control.