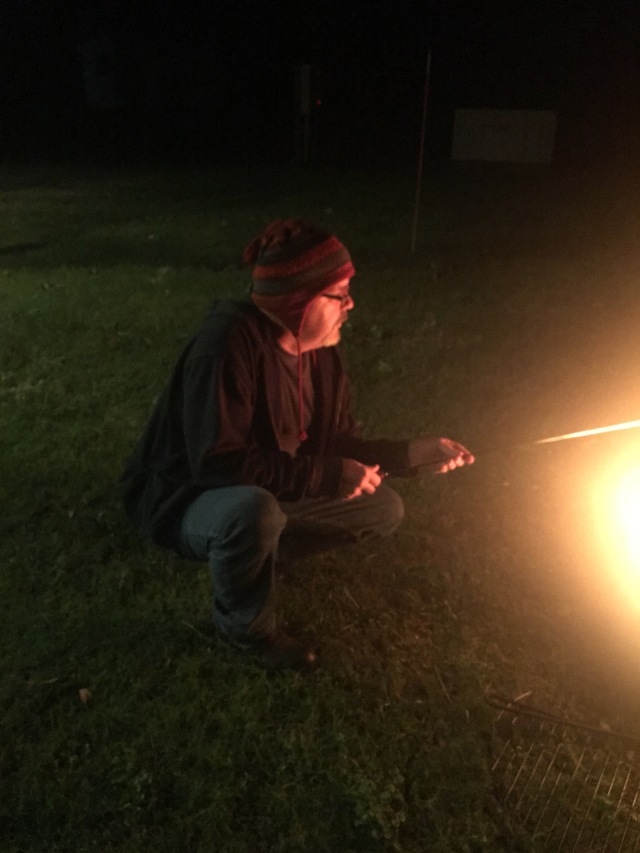 Mike bought me this fire pit for my birthday in June. Tonight was the first night we had a fire in it. It is a fairly warm night though a cold front is coming through later. This fire marks another big moment in our journey with PTSD. When I first met Mike he was uncomfortable sitting on his front porch even during the day. I remember sitting in his living room looking at the porch and the rocking chairs that he has there. The rocking chairs kept calling me. I initially had no idea he was uncomfortable sitting on the porch but he graciously came outside with me for a few minutes. I did not understand his fear as I always sat on porches without another thought for my safety. Mike was always on edge and wary always looking around waiting for danger to arrive. He has since then grown to be comfortable and happy on the porch and he loves it now. Some days I cannot get him to come inside. Mike sits on the porch with Meadow our dog while I am at work. He speaks often of how much he loves the porch and being outside with nature again.

Before heading to the farm we decided that when we got home we would have a fire, I would roast marshmallows and he would cook hotdogs over the fire. When we arrived home after sunset I could see the hesitation in Mike’s eyes. He was on edge and not sure he wanted to have the fire. I told him it was up to him. After five minutes he went outside and started the fire. I went outside and stood with him while the fire took hold. I ran inside and got the marshmallows and proceeded to burn a few but loved eating them. Mike then went in and got the hotdogs. While he was inside I brought one of our rocking chairs off the porch and put it near the fire. Mike got the other rocking chair after he finished eating his hot dogs. I sat on the rocking chair listening to the crickets and foxes call. The wind was gently blowing through the trees. I was at peace and loving the quiet. Mike on the other hand was still a little on edge. I told him how I have often stood around backyard fires just hanging out. Mike shared with me when we got inside after the fire was out, that it was a big step for him that he was not expecting. He said he is comfortable on the porch and was surprised to find that ten feet from our home in the dark was a little unnerving. I told him to give himself credit for doing it. We are hoping to have another fire soon. PTSD and living with it is as most endeavors in life small steps forward. Mike is one of the bravest people I know how he faces his fears every day. I love him so much for always trying.