Arriving in the Moment. Trying to.. 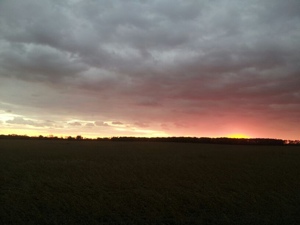 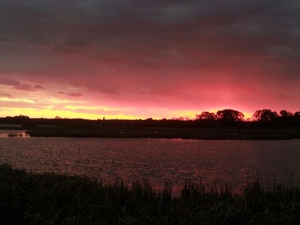 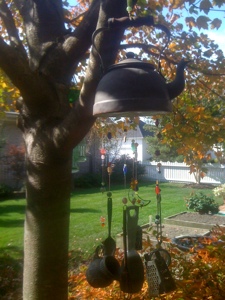 It’s been a week since the hurricane swept through our state. We were southwest of where it made landfall by about one hundred and fifty miles or so. We had quite strong winds but the electric held and we received about nine inches of rain. It was the first time I ever worried about the river breaching it’s banks. Thankfully it did not. The wind blew so hard it shook the house a number of times. All in all my state made out very well. We had one community on the bay that was hit hard and many lost their homes and cars. My heart and prayers goes out to those in New York and New Jersey still living in hell without electricity, heat, food and water. Fuel and vehicles and in some cases homes. It makes me appreciate the little things I do have. And the big things too.

I have been very preoccupied with work issues. I have been trying not to let then bother me or bring it home with me but I find it difficult lately. One thing that has been helping me is I started a major fall cleaning and downsizing. Nothing like I did two years ago when I donated thirty five boxes of books to a local charity and twenty seven boxes of things to goodwill. This is a smaller scale downsize though I already I have three boxes of books ready to donate. Why I clean and downsize when things bother me I don’t know but it seems to help me channel my energy and get my mind thinking about other stuff.

My dear friend, the sunset and cloud lover, sent me the top two pictures on Friday while I was at work. I was so happy to get them as my phone would not let me take pictures as I had too many stored. I have since deleted one thousand pictures I hope to pare down another thousand to have a lovely number of one thousand five hundred on my phone. I just loved the colors in the sunset and the gray in the clouds to offset the colors. It was truly a breathtaking sunset. I love getting pictures from him and we race sometimes to send the sunset picture to the other first.

On Saturday at a petsitting job, two cats I care for had captured a sparrow and brought it inside the house. Thankfully the sparrow was able to free itself from the cats. I walked in, saw a few feathers on the floor and thought they had killed another bird as the day before they left me a headless bird. It took me a moment to realize the bird sitting on the windowsill was real. It sat so still. I was trying to figure out how I was going to capture it and get it back outside when inspiration hit. When I worked on the farm birds would get trapped in the greenhouse all the time. I was always freeing the birds-sparrows, red winged blackbirds, bluebirds and robins. I quietly approached the bird and put my hands around it gently and picked it up. It briefly struggled but after one wing flap it quieted and we made our way to the door. I let him out the front door and he sat on my hand for a moment before flying off. It felt nice to make that connection.

I finally saw Jupiter last night after many cloud filled evenings and the sun came out today for the second time in twelve days. It was nice to see both of them.

I hope this finds you well. I am trying to practice a walking meditation of arriving in every moment in each step. It is a challenge but has helped me lately with my stress and worry. Do you have any ways you deal with stress and worry? Anything that is calming? Productive? Creative?

7 thoughts on “Arriving in the Moment. Trying to..”