Vacation, The Bridge & A Bugeye 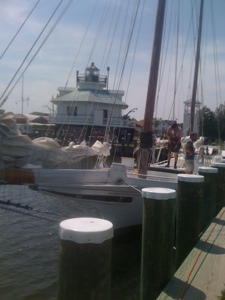 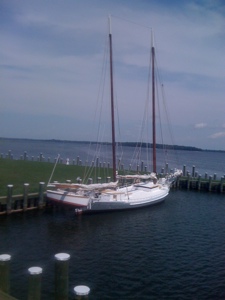 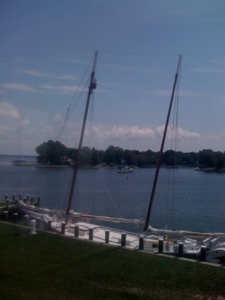 Over the past week I have been on vacation and loving it. I started off rather unceremoniously by giving my apartment a thorough cleaning as well as doing all my laundry including clothes that have been in my closet waiting for fall and winter. On Sunday, I made my first trek over the Chesapeake Bay Bridge. I headed to the airport and enjoyed the new observation area at BWI. It has a sweet place for kids, a bar, lots of airplane parts-large ones at that-an engine, wing, tail section and a nice place to sit and enjoy the planes taking off and landing. They have binoculars, like you see at boardwalks mounted on stands, to get close up looks of planes. They had signs explaining the different planes and the hand signals the grounds crew used. I loved sitting and rocking in the rocking chairs. There were families waiting for loved ones on arriving planes, some people were snoozing. I found a seat next to an older couple who it seemed to me were there to just watch the planes. The man announced quietly to his wife what each plane was and scored each landing like a judge at the Olympics. I got a kick out of them especially when they got drinks from the bar and kicked back to enjoy the view for a longer time. It is a nice place to hang out and it is before the security check points. Being a plane junkie I thoroughly enjoyed myself.

As I drove home from the airport I again crossed the Bay Bridge. I was about five or six cars behind an escort vehicle-a car that follows the driver for a car whose driver is uncomfortable driving over the bridge. As we came off the bridge the two vehicles pulled to the shoulder and I saw the person who was frightened to drive over the bridge pop up from the floor of the back seat. I thought bless their heart for being frightened but thank heavens they were smart enough to get a ride over. It was a beautiful day to drive over the bridge. Ships were lined up waiting for the harbor pilots to take them up to Baltimore. I do understand the fear of the bridge though. In storms it can be scary to drive over, I’ve crossed a few times in storms where I’ve had to pull over to the side of the road once off the bridge to get my heart calmed down. And now there are workers on the bridge working high up on the spans, looking tiny up on the scaffolding. It makes me queasy to look at them. I have a fear of heights but do ok crossing the bridge.

All the pictures I have today I took at the Chesapeake Bay Maritime Museum. The top picture shows the light house that was common on the bay at one time. Also in the picture is a boat called a bugeye. My great-great grandfather built seven out of the three hundred or so that were built on the bay to fish in the mid to late 1800’s to mid 1930’s. Today there are not many intact surviving floating ones. The middle picture of the bugeye I took from the top of the lighthouse. The bottom picture I like because if you look on the one mast a man is high up on one performing maintenance. The maritime museum was wonderful for me in addition to providing a history of the bay, it’s lifestyle and waterman, it helped provide me a connection to my past in a way I had not felt before. I realized my grandfather and the men who helped him build his boat and in fact many who built boats before electricity had their work cut for them. The masts were made usually from a single tree. Standing in a skipjack boat, (another larger wooden sailing fishing boat) in one of the buildings, standing at the wheel which was at the stern and then looking up to the bow which seemed a very long ways away to me and mind you the sails were not even up. What a hard life. My mother took me a few years back to my great-great grandfather’s grave on Kent Island. It has a bugeye carved into the grave.

It was nice to connect with the past a little bit while taking time off from work. Also went to DC but that is another day a more pictures.

Have a great Sunday!

4 thoughts on “Vacation, The Bridge & A Bugeye”