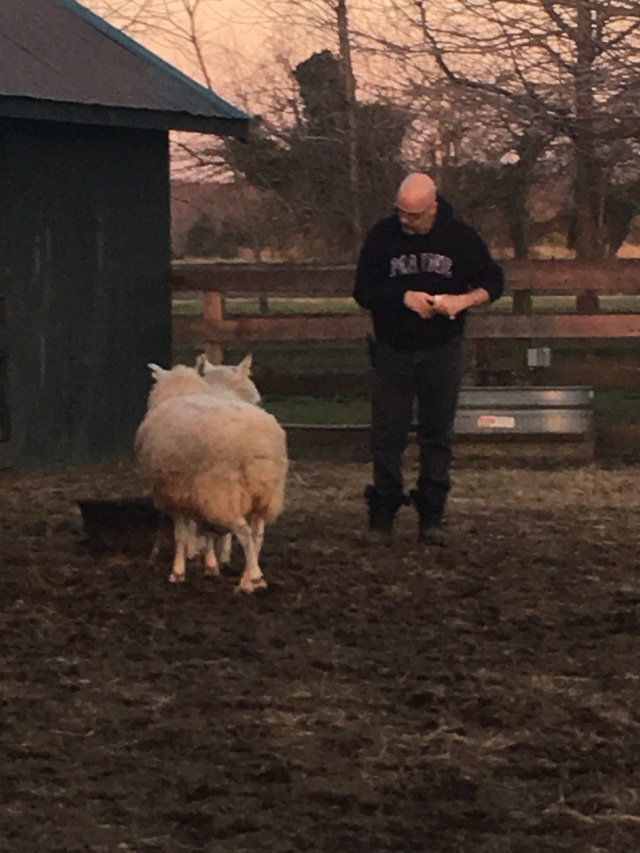 Lambing season arrived early at the farm this year with two lambs born on February 10 and two more born Valentines Day. For whatever reason unknown to both of us Mike said he would go to the farm with me Valentines morning. Mike is not a morning person and usually just joins me for the afternoon feeding. Well to cut to the chase when we arrived at the farm I gave the herd a glance and did not see any lambs other than the twins in the lambing stall with their mom. Mike started getting the hay and grain ready for the ewes and I climbed the gate to join the ewes and look over everyone more. Much to my surprise the herd parted to reveal what I thought was mom with her lamb. Mike helped me get the ewe and lamb in the adjoining lambing stall when I realized the lamb was not trying to drink milk and another ewe was calling constantly. I called my boss to let her know a lamb had arrived but I think I put the wrong ewe with the lamb. She advised me to remove the one ewe and put the calling one in with lamb which we did. And much to my relief the lamb started drinking his milk. My boss explained to me sometimes ewes getting ready to lamb try to steal other ewes newborns thinking it may be theirs. Sure enough the wrong ewe ended up having a lamb of her own hours later. All the lambs and moms are happy and healthy. I have to give Mike enormous credit for joining me at the farm when the high temperature for the day was 12 degrees. He was a little unsure of how to help but between the two of us we got it done.

Tonight at the farm is where all the pictures from today were taken. Mike again was very game as we had turned out the moms and lambs to graze today and had to put them back in their stalls for the night which was a little tricky. I had to get a ewe and her twins in one stall, another ewe and her lamb in the end stall and had Mike sit on a straw bale and hold onto the alpha ewe’s lamb in hopes the ewe would hang out with Mike so I could get the others settled. Mike and the lamb seemed to enjoy each other’s quiet company. The lamb and his mom were happy to be get in their stall for feeding. I always feel a little added stress with the onset of lambing season but with Mike’s help I feel better about it.

The sunset tonight was beautiful as was the almost full moon rising. I took the sunset photo over the pond and then later got a photo of blue the Clydesdale with the sunset behind him. I enclosed a photo of Mike with the two elderly ewes. I thought it looked as if they were speaking to each other.

I am very slowly getting unpacked and have hung most of my artwork. I am excited the be home again as I have been gone for twelve of the past twenty days. Home is a wonderful place to be. I enjoy being in my own bed and really like being among my books, Mike and his dog Meadow. Mike and I have been looking forward to our future as well as loving the present. The one piece of advice I would give someone if asked is don’t settle for just anyone in your life but expect and demand the best. Had I settled for just anyone prior to Mike to prevent being alone and conforming  to what society said was acceptable at the time I would have missed out on meeting Mike and finding someone who saw in me what others took for granted or missed.

I am looking forward to spring and warmer weather. Check out Orion, the Pleiades and the moon. They are amazing right now. Best wishes and Namaste.

2 thoughts on “Lambing, Sunsets & Not Settling”