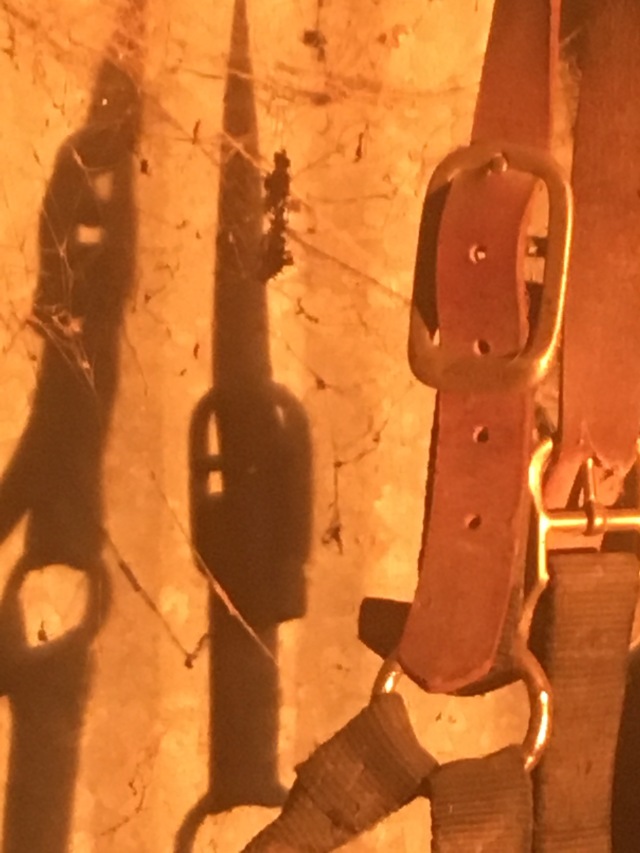 I have been watching the sunset fall into the hay barn over the last few weeks. As the sun marches back across the sky in pursuit of spring I have been enamored by the sun washing into the barn. The way the sun lit up the halters drew me in. The hay barn was recently filled to the rafters with hay so space now is limited which is fine by me.

Years ago when the barn was a chicken house it housed about thirty hens and a few roosters. Every so often snakes would find their way in to feast on eggs. So I was wary of going in given my fear of snakes. I was glad when a new more secure chicken house was built with a concrete floor reducing the snakes in the chicken house to zero. The new chicken house is spacious with room for sixty hens and a pen to raise chicks.

Since I was a smal child I have seen spirits, ghosts, shadow people and other worldly entities. Usually I see most fleetingly but others I see for longer periods. Sometimes I can hear them and other just see them. It was in the hay barn about eight years ago when I saw a spirit sitting on the blanket rack. I jumped back in fright as I was not expecting anyone and was taken aback when he said now can you see me. I answered that yes I can and please do not frighten me again. I don’t mind talking but don’t show up unannounced. I only saw him three more times after that as he seemed happy that someone could see him. I was surprised to see him there as it was not in an area of the farm known for spirits. There is a spirit that is supposed to inhabit the main house but no one I know has ever seen her. The only other spirit I have seen at the farm was a civil war solider walking down the driveway.

I see spirits most every day and as Sheldon Cooper would say I’m not crazy my mother had me tested. But in my case my mother did not have me tested I has myself tested. I have lived with this ability for over forty years and don’t think twice about it but it frightens some when they find out or see something too. In our disconnect with nature, the natural rhythm of the world and universe people forget that there is more to heaven and earth than we can see and understand. I have found that the ability has brought me to a deeper connection with the universe and ultimately myself.

They say the eyes are the window to the soul. I have included with the hay barn photos a photo of Captain and me reflected in his eye. I love the old guy.