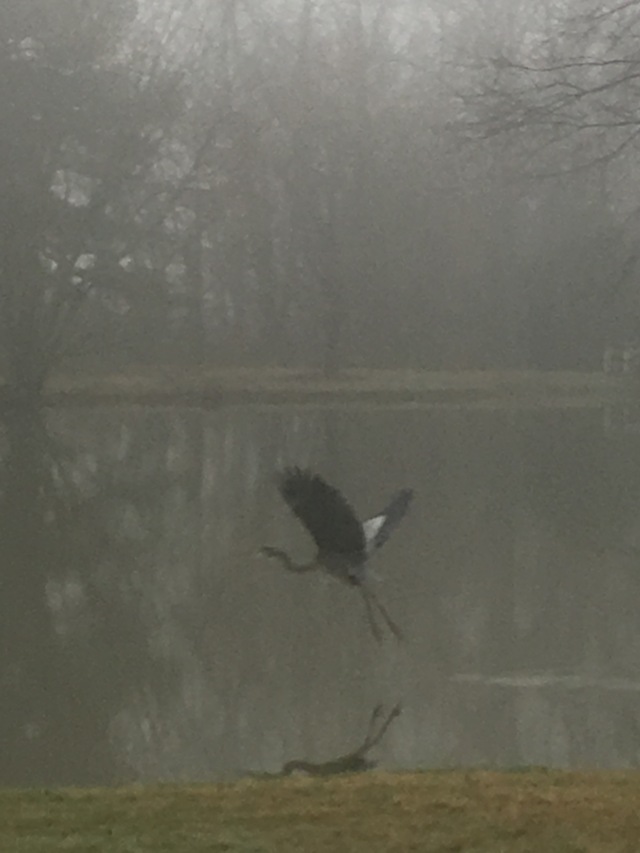 It was still foggy when I woke this morning. It was slow going driving to the farm. There was maybe fifty yards visibility. I was happy to see the snow geese were still around this morning as I came across a field of about five hundred quietly eating and not bothered by me stopping to watch them. That is some of them in the first photo. I took care of the farm by myself this morning as Mike stayed home for Meadow’s grooming appointment. (Meadow looks wonderful😃) I love the quiet mornings at the farm when no one is out but me and the animals. With the fog it seemed mystical, magical and at one with the universe. I started in the sheep barn. The lambs are only two weeks away from arriving. The ewes are happy being fed corn, hay and beet pulp. After putting hay in the feeder I got the elderly ewes corn ready and within easy reach before I fed the pregnant ewes. I feed the first crew at the gate-about eight to ten ewes then I climb the gate and enter the pen to feed the rest in bins along the wall. Then I attend to the two elderly ewes who patiently wait for cracked corn. I put a little soybean meal in too for protein. The old gals eat happily without bother from the younger ewes. This morning I was concerned as I was unable to locate one of the elderly ewes one whom I have named Agnes. After I finished feeding the sheep I prepared to head out in the pasture to locate Agnes. As always with the old gals death is not out of the question and that was what I thought. I put the feed buckets up and turned to head outside when here comes Agnes. I think her hearing has gone and she had not realized I had arrived. She was not muddy or wet indicating she was out all night or unable to get up. She marched up to the gate and I fed her a little corn and beet pulp.

I then headed to care for the horses and chickens. Everyone was happy and well. I took time to take photos of the great blue heron in the fog as well as the farm peacocks. I enjoyed photographing the chickens too. Little did I know I would be taking three of the chickens final photo. When Mike and I arrived at the farm this afternoon we found two of the roosters gone (we did find one body) and a hen was missing. We think a fox got them. I will miss the roosters as they were sweet but fierce protectors of the hens. When I first took Mike to the farm he was astounded that the rooster was so tame towards me and ate corn from my hand.

When Mike and I were getting the horses grain ready Mike was tapped on his shoulder. Mike said to me someone just tapped me and acted like they wanted my attention. I said it’s the same man from last week. This time the man spoke to me and said Tell him my name is Stuart and he needs to listen to what I am trying to say. I relayed the message and Mike looked confused. I said Stuart knows you can hear him but you ignore him so he tapped your shoulder. Mike told me he did not feel fear he was just surprised to be touched on his shoulder. I explained to Mike that he has the abilities to hear and feel spirits but needs to not doubt his abilities. I explained that most spirits want to be acknowledged and not forgotten. Mike pondered this while we drove home.

Today was a good day. Mike was for the most part at peace. He visited his family early afternoon and accompanied me to the farm tonight. We enjoyed a dinner to go at our favorite Spanish American restaraunt Tenchi’s. Mike talked a lot this afternoon and tonight which sometimes he does not do when having an episode. When we got home we watched the four man bobsled races on the Olypmics. It was good to have him have a peaceful and quiet day where he is not full of aniexty, energy and angst.

We are busy spring cleaning our house and prospect. We are trying to get a jump on things as the weather here is warm for the season and climate change is definitely happening in Delaware. Spring peepers have been calling for a week, trees are budding and I had to stop Friday on my way to work to let a midsize snapping turtle cross the road. I think the spring cleaning helps us to start anew. Much as spring does in spite of still being February.